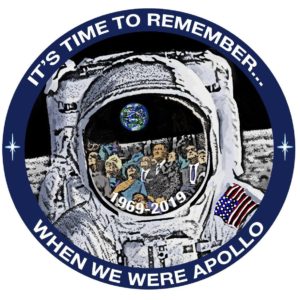 When We Were Apollo, a New Documentary Film about Apollo’s Undiscovered Heroes Launches Crowdfunding Campaign on Kickstarter, September 26, 2017

Doing the big, impossible things brings out the best of ourselves.

Los Angeles, California, September 13, 2017 — Contact Light Films announced today the first phase of funding for its feature-length documentary film When We Were Apollo (W3A), currently in pre-production, to launch via the crowdfunding platform Kickstarter on September 26, 2017.

Space exploration, physics, technology and the pure spirit of innovation owe an eternal debt to the astronauts and NASA figureheads who took us to the moon.

But what about Apollo’s lesser-known heroes —the builders, technicians and engineers who also committed themselves to the mission? What was that intangible spirit of tackling the impossible that made them succeed? Where is that spirit today?

Stories of local heroes are resonating with diverse audiences, from the history buff to the space aficionado, from Baby Boomers to Generation Y, and with people in the United States and around the world. When We Were Apollo is uniquely positioned to capture, engage and grow audiences with the real-life accounts of local heroeswhose stories are yet to be shared.

“In When We Were Apollo, and in your team’s vision, we see a compelling and timely aspirational narrative in humanity’s reach toward new frontiers, one that transcends the boundaries of race and class, and the differences of individuals in America.”
–  Jeff Gomez, CEO and Founder of Starlight Runner Entertainment.

“We appreciate all the ways that heroes of yesterday and today embody the spirit of Apollo in their daily lives—that conviction that dreaming big and tackling the impossible is really, really important,”      –  Zack Weil, Director of When We Were Apollo

When We Were Apollo introduces audiences to several unknown heroes from Apollo’s workforce, and reveals what putting a human being on the moon meant to them. It will also feature young people from the newest generation focused on the next giant leaps for mankind, and what wisdom Apollo’s heroes offer for their journey.

When We Were Apollo aims for impact beyond the film:

Production will begin in Dec. 2017 and slated to shoot on location in Huntsville, Alabama; Houston, Texas; and Cape Canaveral, Florida. The film will premiere in 2019, in time for the 50th anniversary of the Apollo XI moon landing in 1969.

About the W3A Kickstarter Campaign:

The Kickstarter campaign launches Sept. 26th and wraps on Oct. 31. It will fund the first phase of filming, which includes the main interviews with several undiscovered Apollo heroes. Backing this campaign means helping to preserve a piece of our history we will otherwise lose. It also sends the message that people still believe in the spirit that Apollo’s heroes embodied: a community coming together to tackle the huge, “impossible” things facing humankind. (Media teams: Click here to privately preview the Kickstarter campaign page.)

In addition to a special advanced release of the film, backers can receive: